Although I have has multiple breakthroughs as far as my knowledge has been concerned over the last few days, I am still very stuck. The good news is, I am now beginning to think differently about my forms. Previously, I was worrying about the form first whereas now I am more conceded about creating the params that I want to be given from the form and then making the form first those params that I want. Here are the current params I would like: 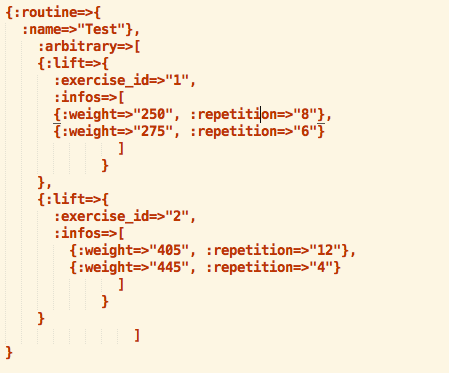 On the above code, I have a routine, which has a name. That routine has this thing called arbitrary which means nothing. But that routine has many lifts, each with an exercise_id and many infos(or sets) which have weight and repetitions.

These are the params I constructed in IRB.

The issue I am now having is that when I choose more than one exercise in my short form: 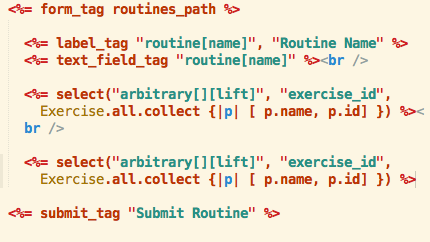 The params are only showing :lift once. My guess is that it is only picking up the last exercise_id because it is overwriting each lift and just leaving the last one. After about two hours so far today going down a rabbit hole I have decided to post my first question on Stack Overflow. So if anyone can help you can see my first questions here.